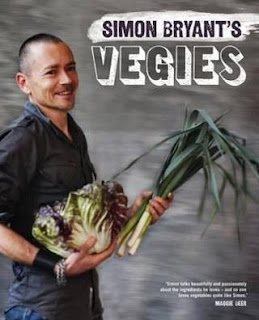 Simon Bryant's debut cookbook is a vibrant, inspiring collection of vegie recipes that will appeal to vegetarians and meat-eaters alike. Somehow I missed it when it was published in July last year and have just recently discovered it at Unity Books Auckland who tell me it is a title they keep in stock. I happily forked over $50 and took the book home with me. Unity have a comprehensive cookery section by the way.

In Vegies (Lantern) Simon guides us through the changing seasons, as he shares tales from his vegie patch and useful tips for selecting the finest produce. He shows us new ways to enjoy our favourite vegies and learn simple cooking techniques to make them really shine.
Vegies totally dispels the thought that many have that vegetarian cooking can't be daring, original and delicious. 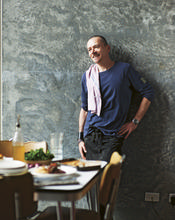 Simon Bryant began his cooking career working in Thai and Indian restaurants in Melbourne. In 1995, he joined the ranks of the Hilton Adelaide's kitchen brigade, where he worked for a time at Cheong Liew's celebrated Grange restaurant before becoming Executive Chef of Hilton Adelaide in 2001.
From 2006 to 2009, Simon co-hosted four series and 152 episodes of the ABC's immensely popular TV series The Cook and The Chef, alongside food icon Maggie Beer. This show was a favourite in our household.
Moving on from the Hilton Adelaide in 2009, Simon is currently an ambassador for Animals Asia, writes magazine articles on ethical food production and maintains an active interest in issues surrounding animal welfare practices. He is also a semi-competent gardener and committed vegie eater !