Posted by Beattie's Book Blog at 9:34 PM No comments: 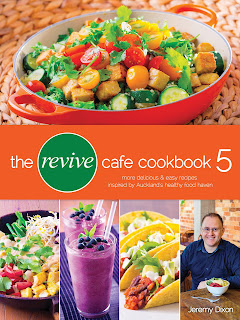 The healthy cookbook series that is transforming New Zealanders’ lives

Exciting news for Revive cookbook fans!  You will have even more delicious, healthy, plant-based recipes to cook from when Jeremy Dixon’s new REVIVE 5 releases this September.

In addition Jeremy provides 1000s of different combinations of Breakfast Bowls, Dahl, Dessert Glasses and Refreshing Drinks in the popular Step-by-Step section, to help readers customise their own recipes.

Jeremy Dixon, who also owns two Revive cafes in central Auckland, is committed to sharing his healthy eating and living principles and gauges the success of his recipes not only by his books’ excellent sales figures (over 120,000 have sold to date in New Zealand alone) but also by reader feedback. ‘My objective is to get normal people eating healthier food,’ says Dixon, ‘and it’s so satisfying to hear from readers who are enjoying the recipes, cooking more healthily and experiencing significant health benefits!’

In addition to his Revive cookbook series,(he must be NZ's busiest cookbook author), Jeremy is currently hosting a 26 series USA television cooking show called COOK:30 on US Channel 3ABN. Episodes can be viewed from NZ via: http://www.revive.co.nz/cookbooks/cook30-cookbook.
The accompanying cookbook, also called COOK:30, released in May this year in New Zealand and the United States to coincide with the start of the television series.

Dixon’s recipes contain whole grains, plant-based protein, fresh produce and virtually no processed sugars or flours.  All recipes in REVIVE 5 are dairy and egg free and most are gluten free.

“The proof of the pudding is in the eating, and Jeremy Dixon has proved that plant-based food can taste wonderful! He is a fantastic arranger of flavours, and has the ability to take simple ingredients and make them absolutely delicious!”
Jim Gilley, Channel 3ABN USA, President & CEO

About Jeremy Dixon
After a successful career working for Sanitarium Health Food Company for 10 years as a marketer of healthy breakfast cereals including Weet-Bix, Jeremy followed his long-held dream of becoming a chef or owning a café.
Having discovered the benefits of healthy eating himself, he took a bold move and decided to leave his job to open a healthy café in Central Auckland. 10 years down the track the Revive cafes have bhecome an Auckland healthy-eating institution,with a large and loyal customer base.

Jeremy has kindly agreed to me publishing the following recipe from the new book, I
have made this and can confirm it was both delicious and easy to make: 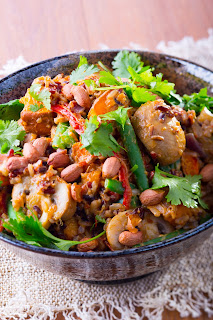 --------------------------------
I love it how most supermarkets now stock more than just one token style of brown rice.  I try
to make sure most of my ingredients are relatively easily available so when they pop up in my local supermarket that is often a sign they can appear in my cookbooks.  Wild rice is great and adds excellent colour and crunch.   Watch that you cook it properly as you do not want the rice too chewy or you can put people off eating
rice forever.

In a pot combine the wild rice and boiling water and heat to bring back to the boil. Turn down to low and simmer with the lid on for 25 minutes or until the water has gone and the rice is soft.  This should yield 2-3 cups of cooked rice.

In a bowl mix the kumara and oil together.  Put onto an oven tray and bake at 180Â°C (350Â°F) for around 25 minutes or until just getting soft.

In a pot or pan saute the oil, onion, ginger, garlic, mushrooms and capsicum for 5 minutes or until the onion and mushrooms are soft.

Add the beans and cook for a further 3 minutes.

In a cup mix the peanut butter and hot water into a cream and add to the vegetables.  Add the honey, salt and raw peanuts.

Stir in the cooked rice and kumara.  Garnish with coriander.
Posted by Beattie's Book Blog at 5:20 PM No comments:

Posted by Beattie's Book Blog at 11:53 AM No comments:

DRINK OF THE WEEK KAHLUA AFFOGATO


Posted by Beattie's Book Blog at 7:35 PM No comments:

Posted by Beattie's Book Blog at 5:59 PM No comments:

Lots of good stuff from Julie Biuso in her shared kitchen

Posted by Beattie's Book Blog at 5:17 PM No comments:

Posted by Beattie's Book Blog at 5:03 PM No comments: